Today was our group performance so instead of heading to our usual room, our group headed straight to the second room to begin setting up for our performance and after a few trips around the University to gather recycled materials, to the shop for cello tape and balloons and most importantly, making sure we looked the part . . . we were ready to start. For our performance we decided that we wanted to develop on different types of learning styles, taking into consideration classroom tactics and behavioural management. I’m sure plenty of you have had experience working in a school or nursery setting, the kids have just come back from their lunch and they are full of beans!! What do you do? How do you grab their attention? We wanted to play on this and make our performance very active using a different range of activities to keep students engaged from creative writing, to hands on crafts or a quiz game, just enough to keep the students engaged. 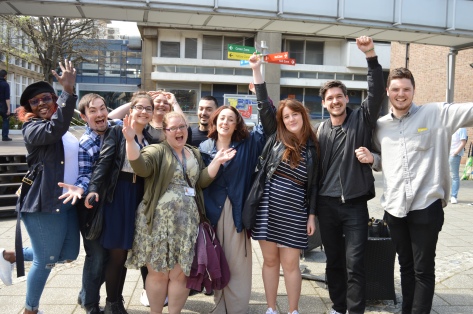 We began with Katie providing a short introductory speech to our peers explaining what the purpose of today was and what was going to happen shortly followed by our first activity. This first part of our performance was introduced by Meredith who had planned to take the class through a game called Jeopardy and for this we asked the class to divide themselves into three groups. What the class were soon to realise was that this was not going to be the only activity of the morning and with each activity the groups complete they will gather points. These points are important as they decide the fate of the resources for their main activity which was soon to come. 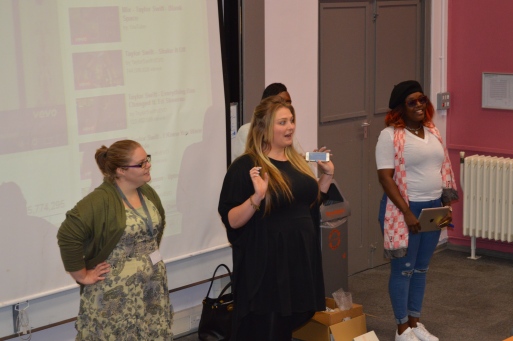 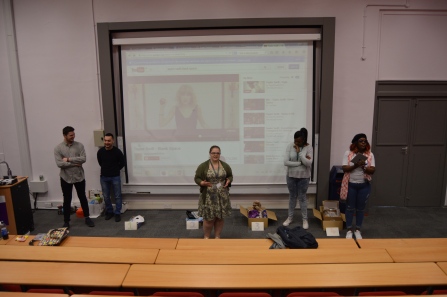 For this part of the performance we used an online website to provide the board which consisted of a grid of categories with a points system, the categories and questions were relevant to our course module. With the groups divided, in turns they would pick a category and the number of points that they would play for and if they answered the question correctly and in the allotted time given then they would receive the points, if they weren’t able to answer the question quick enough then the question would be available for the other groups to answer. Each group did extremely well, especially as it was a game that no one was familiar with and it soon got very competitive. Once that task had finished we moved on to our next activity (this gave us time to tally up the marks). Our next activity was introduced by Perry which was built upon a lesson that we had in week 21, below is a quick recap of that lesson but if you want to refresh your memory you can find the whole blog in Learning Log week 21.

The basis of our a contraption from the recycled materials that would be strong enough, if dropped from a certain height to protect whatever it contained on the inside for instance, ours contained an empty balloon. Although we would have liked to use a water balloon or an egg so we could see if our contraption had any effect at all. We decided that if anyone had won the game, they could pour a cup of water over the teachers head and f they lost vice versa. The aim of this game was to teach kids to be resourceful, the importance of teamwork, its a fun incentive to get children to learn and for them to remain engaged in an activity, teaches children to be graceful winners or losers. We decided that our product would be called “around the room in one day” just because it looked like a hot air balloon and our slogan was to be “blow your mind” as we used balloons.”

That is exactly what our next activity for the group was going to be, they had to play our game that we devised in week 21. The groups had to design and create their product that would protect the water balloon that would be placed inside of it. They would give it a name and create their very own chant or jingle and then present it to the judges at the front of  the class who would score them on it.  We provided each group with a sheet of paper and pens so that they could design their products in the form of a poster and they were given 10 minutes to create something.

Whilst the groups were busy planning and creating their product name and slogan, our judges were busy at work tallying up their scores on the previous activities.

(Below are our judges at work) 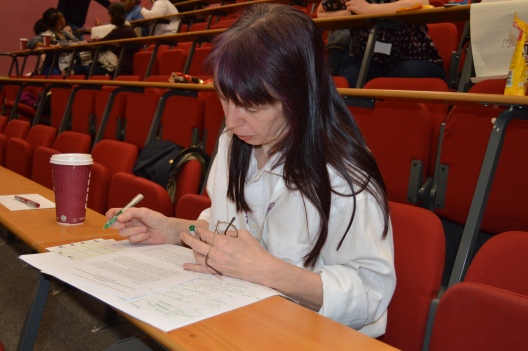 The ten minutes were finally up and the groups one by one came up to show off their product. The first group to come up were the M&Ms girls. 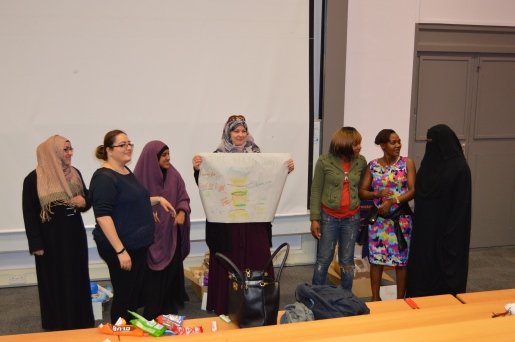 Our second group to come up were called the Wacky Bubbles.

Our third and final group to come up and show off their products were called -6.

After the groups had finished presenting and our judges were finishing up scoring them, we moved onto another quick activity to help build up the teams scores so as though they can determine what heap pile they will get. he game was call “Countries” and for this activity each group had to think of as many countries as they could, appoint one designated member of the team to try and recall as many of the countries that they had recalled to each of our judges. 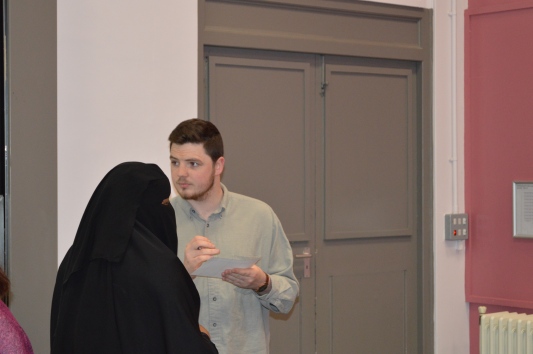 Once our judges had finally tallied up the scores we were able to give out the recycled heaps to the groups so that they can make their products. 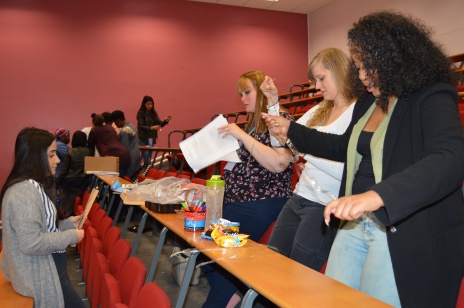 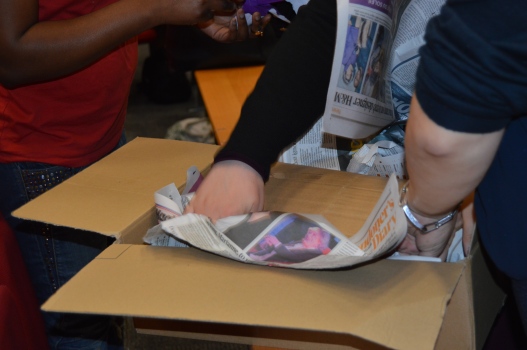 Once the groups creations had been completed we set them aside and started our very last activity of the morning. This activity was led by Dom and was called the creative writing workshop. Here we used the zig zag method in order to tell a collaborative story that was written by the whole of the class, which Katie typed up into a word document and me and Giulia plan to illustrate for (currently in the process of doing so) however here is our collaborative story,

Once upon a time there was a man named Dan. Dan decided to meet his friend Giles in Ibiza. As they met they decided to grab a coffee. Unfortunately the coffee shop was closed. Outside the coffee shop, Dan met Giles’ girlfriend, Francesca. Dan had never met her before and thought that she was extremely beautiful! Dan thought to himself “let me get in there!” He no longer fancied Giles, and for once in his life thought he would go for a girl. They decided to go for drinks later that night while Giles was sleeping. Giles awoke, puzzled, afraid, and rather suspicious! Giles went to the bar and found Dan and his girlfriend kissing! Dan, in shock, shouted “I’m sorry mate! She came onto me!” Giles, enraged, through a punch, “Dan, I loved you!” shouted Giles, “why would you betray me like that?!” Dan replied, “You didn’t have the part I wanted, so I went for your girlfriend.” “What part exactly are you talking about?” asked Giles. While this was happening Francesca has fled the bar with another woman! Giles and Dan were left confused. So after a few more Tequila Sunrises, Dan and Giles left the bar and took a walk to the beach. The rest is history.

After we had finished this we grabbed our products and headed outside in the sun so that we could test them out!! Here are the rest of the images from today! We hope you liked our performance!! Stay tuned for illustrated images from our collaborative story!!

Thank you for reading. ❤ 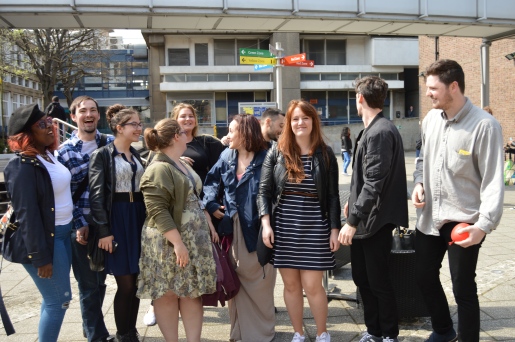 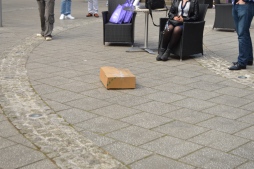 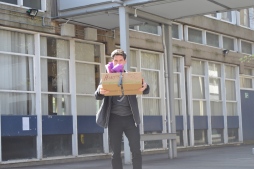 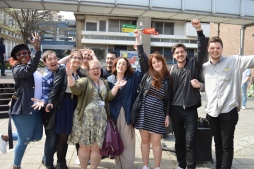 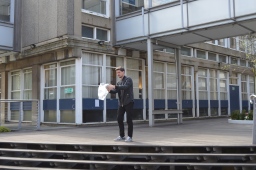